This is the second pending World Record from the McCormick's site in just one week.

The 2004 U.S. Open Water Ski Championships has been canceled due to circumstances beyond the control of USA Water Ski and CCMH Sports, the event manager of the 2004 U.S. Open. The 18th U.S. Open was originally scheduled for Oct. 8-10 in West Palm Beach, Fla., before being postponed to Nov. 19-21 and relocated to Fort Lauderdale, Fla., following the devastation caused by hurricanes Charley, Frances and Jeanne. 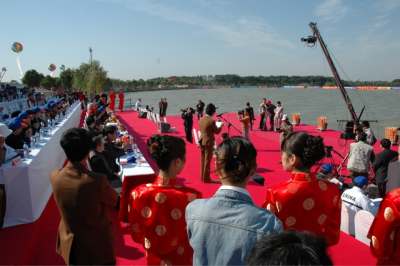 Impression from the Opening Ceremony 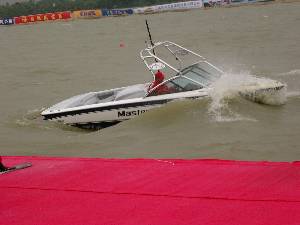 Les Todd struggles to get the Mastercraft to safe harbour just after the Men's Trick event was interrupted with two skiers to go. Russell Gay had just finished his 8020 point trick run!

IWSF President Kuno Ritschard reports that the finals in men tricks and men and women jumping had to be cancelled due to bad weather.
This would mean that the preliminary round in those events would be used as the final score.
Results

IWSF President Kuno Ritschard reports that they started at 7 am with slalom and stopped after tricks due to force 6-8 winds.
Results up to now Winners Podium up to now

03Sep04 Preliminary Round of World Junior Championships Completed in one day

Tournament Officials used two lakes to run all of the preliminary round on Thursday in advance of the coming Hurricane Frances. They will run the final round today and finish the tournament.
Preliminary Round Results

A major issue here is the threat of bad weather from Hurricane Frances. Tournament officials have a contingency plan to accelerate the schedule to attempt to complete skiing before the projected arrival of the storm.

This slalom only event is the next stop in the IWSF's World Cup tour. All of the world's top skiers are there as well as this being the last professional competition for skiing legend Andy Mapple.

Lelani Travers of ITS, the host site, reports:
The storm was 35-40 miles east of us we had no storm damage at all, neither did the host hotel. We never even lost power or phone. The Orlando airport is up and running all flights.

Entry and payment forms are included - Due August 26

Entry forms are included - Due August 26

12Aug04 Waterskiing And The Olympic Games

Click on the "Results" button in the Water Ski World Cup (WSWC) site.
Be sure to check out the Photo Gallery too

17Jul04 Waterski and Wakeboard on the crest of a wave

If there are any problems or issues please email to Bob Corson, World Ranking List Chairman
This is the start of the 30 day review period.

26Jun04 Global Exposure for the IWSF comes with the World Cup

IWSF President, Kuno Ritschard, thanks the Mayor of Enghien-les-Bains, Mr. Philippe Sueur for the big support of the City to launch the first stop of the World Cup, promising at the end if Enghien-les-Bains wishes, we will be back next year.

Check out more at the World Cup web site

Results from the wakeboard only stop can be seen at http://www.worldwakeboardcouncil.com
Daniel Watkins AUS and Hayley Smith AUS are the winners.

Results from the wakeboard only stop can be seen at http://www.worldwakeboardcouncil.com 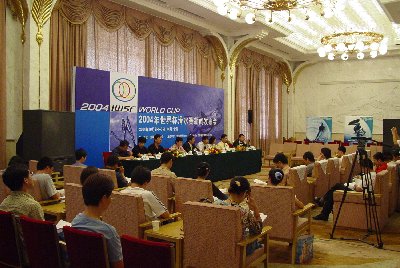 News about the press conference 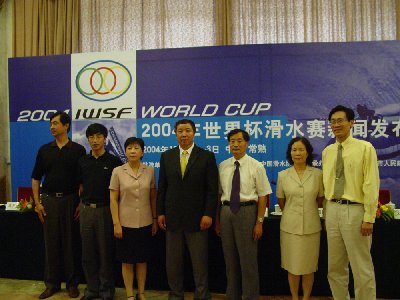 Today the IWSF broke a significant record ! As part of the new 2004 Waterski and Wakeboard World Cup programme, a major Media project was also launched. For the first time ever, today we issued a World Cup introduction story to over 11,000 Sports media contacts around the World. We will shortly increase this to 15,000 targeted contacts. As our President Kuno Ritschard has reminded us, there is a cash prize fund at stake this year of over US$ 650,000 at stake and this will be a great boost to our Athletes during the coming months. This new Media project is no flash in the pan - we will issue another 50 stories between now and the end of the year. Watch out, Waterskiing and Wakeboard are coming to town !

At the recently concluded Chevrolet 45th Masters, the IWSF presented Emma Sheers and Jimmy Siemers with their 2003 Skier of the Year Awards. The awards were presented by Jeffry Armstrong, IWSF Secretary General and Bob Corson, Chairman, IWSF Tournament Council as IWSF President Kuno Ritschard looked on. President Ritschard then presented Emma with her commemorative ring for also being named IWSF Female Athlete of the Year.

31May04 Andy Mapple announces his retirement from competition at Masters

In an emotional speach puncuated by two standing ovations, Andy Mapple announced his retirement from competition. He will finish his committed tournaments this year. He said that he will stay involved and hopes to help promote water ski competition.

The 2005 World Cable Wakeboard Championships will be hosted by the Hungarian Water Ski and Wakeboard Federation and will take place in Dunaharaszti (near Budapest) from August 5-8.

The 2007 World Cable Wakeboard Championships will be hosted by the Austrian Water Ski Federation to take place at Feldkirchen (between Salzburg and Vienna), date to be announced.

16May04 The Pan Am Region has a new web site address

14may04 Questions about the World Seniors Trophy Rules?

Here are your answers

President Kuno Ritschard inaugurated the National Water Ski and Wakeboard Trainingcenter in Feldberg/Germany (100 km north of Berlin) together with 3 personalities from sport and politic. This new site will be most likely the venue for the 2005 World u21 Championships the weekend before the World Games in Duisburg.

04May04 Asian-Australasian Championships in progress

The traditional Lion Dance was performed at the opening ceremony.
Click here for the event web site with results and news.

Everybody seems to be happy after having concluded the agreement for the World Cup stop at Thorpe/GBR.

Most of the world's top skiers have indicated their intention to enter the IWSF World Cup series of tournaments which will make the competition intense and the World Cup title the most hotly contested ever. This series will also have the first individually contested World Cup Trick title.

26Apr04 Asian Australasian Championships are being held in Zhanjiang, China from May 1-7

The 2004 FISU World University Water Ski Championships will be held in Balakovo, Russia on September 1-6, 2004

The World Junior Championships be being held at Groveland/Florida, Sept 1-5

12Apr04 Pan Am Region Championships and Congress in Lima, Peru

At the Pan Am Region Congress, new regional officers were elected.

Check for your local listings

The IWSF World Cup with the final Men’s Water Ski and Wakeboard events in Doha/Qatar has been officially announced at a press conference during the Qatar Sport International exhibition in Doha at the booth of the Qatar Marine Sport Federation.

Now showcasing the premiere events of the IWSF with tournaments taking place around the globe. Be sure to follow the progress of your favorite athletes as they compete for the coveted title of IWSF World Cup Champion.

Links are in the rules section in the left column on this page.

Nerissa Wright was recently awarded the the Australian Junior Athlete of the Year award after her recent success at both the Junior and Open World Barefoot Water Ski Championships.

Sponsored by the IOC and hosted by the Morocco National Olympic Committee in Marrakech, Morocco March 7-10, the Conference was attended by over 600 delegates representing 137 countries. Jeffry represented the IWSF as Secretary General and Chantal Amade, former IWSF Secretary General, represented the French National Olympic Committee and the European Women and Sport (EWS) as Chairwoman. The Commission is charged by the IOC with elevating women in the decision making process in sports, from grassroots organizations through the IOC Executive Board.

Jeffry and Anita DeFrantz USA The IOC chairperson of the IOC Women and Sport Commission.

Today, IWSF President Kuno Ritschard officially announced the 2004 World Cup, a series of 3 event tournaments and wakeboarding that will take place at sites around the world.

Read the full details in the press release here

Hint! - If you are searching for your name, it is best done by saying:
john AND smith
if your name is John Smith.