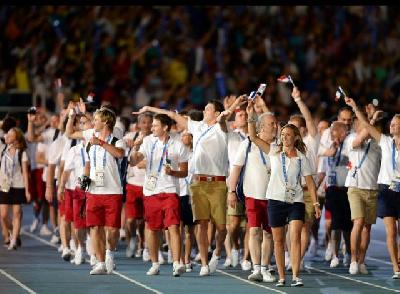 With 101 Nations, 31 different sports and over 4,500 athletes divided into six categories, Waterski and Wakeboard are in the Trend Sports group for these World Games. The host City of Cali in Colombia in South America is known as the capital of Salsa and the Cali atmosphere is certainly like that of a major Mardi Gras. The Waterski and Wakeboard Finals are on Monday July 29th.

Thursday’s spectacular Opening Ceremony involved hundreds of Dancers from Salsa Schools, Afro and Folk Groups, Musicians, Acrobats, one million watts of light, plus 60,000 watts of sound and 2,000 sq.m of colorful projections! As the athletes from 101 Nations entered the arena, the atmosphere was extraordinary. Now all is set for a perfect World Games 2013.

The Waterski Entry List is indeed impressive as it contains World Record Holders, World Champions and Top World Rankings. The most likely battles in the Finals on Monday next, July 29th, except for the usual surprises, could be between the following :

TRICKS Clementine Lucine FRA and Whitney McClintock CAN. This is a case of the current World Record holder Lucine versus the 2009 World Tricks Champion McClintock. Anything could happen there ! Aliaksei Zharnasek BLR and Alexandre Poteau FRA. Again, the current World Record Holder Zharnasek and World Rank One against the enormous rising talent of Poteau, World Rank Two. We may well see scores close to World Tricks Records in this World Games !

SLALOM Regina Jaquess USA and again Whitney McClintock CAN. Here we have the current World Record Holder Jaquess taking on the 2011 Slalom World Champion, McClintock. Nate Smith USA, ranked Number 3 in the World, appears to be unbeatable these days. He will face the enormous talent of two-time World Slalom Champion Thomas Degasperi ITA. This event is guaranteed to be a very special occasion indeed.

JUMP Marion Mathieu FRA and Regina Jaquess USA. No Jumper has improved as much as World Cup Gold Medalist Mathieu over the past two years. Although not her favorite event, Jaquess is undoubtedly one of the most talented female athletes ever in our sport and will dearly want to secure a World Games title. Zack Worden USA and Igor Morozov RUS. World Cup Star Worden is just returning from injury and is certain to use this opportunity to show that he is back in Podium form once again. Morozov, Russia’s National Jump Record Holder, has a higher World Rank than Worden and he will also be watching Rodrigo Miranda from nearby Chile who will feel totally at home in Colombia. Watch out for sparks on that Cali Jump Ramp on Monday !

The Wakeboard Entry List is also littered with the greatest talent available. Sadly, injury prevented World Cup star Harley Clifford AUS from competing on this occasion. As in Waterski, getting on to that Monday Winners Podium will be an enormous challenge. The most likely battles in the Finals are possibly going to be between the following :

MEN Andrew Adkison USA and David O’Caoimh IRL. What a prospect ! Both have featured very strongly in the World Cup Series. Adkison, a past IWWF World Champion, has all the hard-earned experience to win this title. However, the young rising Rider O’Caoimh is on a winning streak right now, having taken two major titles in Europe this month alone. Let’s see what happens.

WOMEN Caroline Djupsjo SWE and Charlotte Bryant GBR. World Cup Star Djupsjo is also just returning from injury but her experience is loaded in her favor. Young Bryant may lack some international experience but her rising talent could also get her to the World Games Podium next Monday.

Clearly, the 2013 World Games in Cali, Colombia, will be one of the most spectacular events on the World calendar this year. Waterski and Wakeboard will certainly add their unique extreme-sport thrills for all the adrenalin addicts who enjoy seeing athletes pushing themselves to the very limit !

Details will be available here over the coming days :