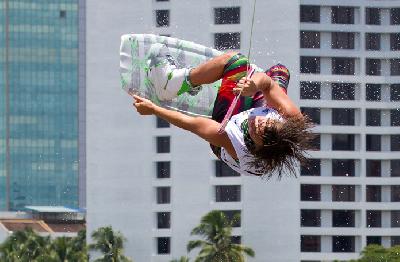 World Number One Wakeboarder Harley Clifford will be making the trip West for the 2012 Action Sports Games.

Minister for Regional Development Brendon Grylls and Tourism Minister Kim Hames have announced the Government?s support of a new major West Australian event, the Action Sports Games Mandurah, as part of Eventscorp?s 2012 Calendar Launch in Fremantle today. The Action Sports Games, running in line with the Channel Seven Mandurah Crab Fest from March 16-18, will incorporate the International Waterski and Wakeboarding Federation (IWWF) World Cup. This is the first time that an IWWF World Cup stop has taken place on Australian shores, with the annual event having been previously held in countries such as Russia, Qatar, China, South Korea, Singapore, France, Ireland, Egypt and Malaysia.

USA Waterski jumper Freddy Krueger in action. Krueger holds the world record for the longest jump (247 feet) and is a 5 time World Champion.

The IWWF World Cup Stop will be hosted by Mandurah for the next four years, this being the first time the event has ever been held in the same place for four consecutive years. "Having successfully completed 32 World Cup Stops around the globe in recent years, this will be our very first Stop anywhere in Australia. With over 30 million active participants in our sport, we are absolutely delighted to have such a perfect stage in Mandurah to introduce our very best athletes to this superb location,? said Kuno Ritschard, President of the IWWF.

?Good luck to all our World Cup Skiers and Riders - and thank you Mandurah for giving us this wonderful opportunity to take part in the 2012 Action Sports Games,? he went on to say.

The event is a huge tourism drawcard for the region, with the City of Mandurah expected to host up to 128 national and international competitors, 18 judges and officials and an estimated 2,000 dedicated supporters.

The State Government has provided funding to the Action Sport Games over the next four years through Eventscorp?s Regional Events Program, which is funded by Royalties for Regions.

The Action Sports Games line-up will also include a national BMX and Skateboarding competition and an international Freestyle Motocross Shootout between Australia and New Zealand throughout the weekend.

The total cash prize pool for the Action Sports Games will exceed US$300,000, with the enticing sum expected to attract the best wakeboarding and water ski stars from around the globe to our state.

The highly successful Channel Seven Mandurah Crab Fest is now a regular fixture on Western Australia?s annual events calendar and will enter into its fourteenth year in 2012. The 2011 Mandurah Crab Fest was considered to have been the biggest and best ever, attracting an estimated 100,000 festival goers.

?The City of Mandurah is delighted to be given this fabulous opportunity to host such a prestigious event alongside our annual Channel Seven Mandurah Crab Fest, particularly as it?s the IWWF World Cup?s first time in Australia,? said Mandurah Mayor Paddi Creevey OAM.

?Not only does the event provide a magnificent opportunity for our community to experience spectacular world-class water sports on our doorstep, but the IWWF World Cup Stop will also provide an estimated $3.2 million boost to our local economy. We look forward to welcoming competitors and spectators from around the globe to our beautiful city, one of the most liveable communities in the World,? the Mayor went on to say.

Further details on the Action Sports Games will be announced on Tuesday January 24 when the event is officially launched by the Mayor of Mandurah in Mandurah. 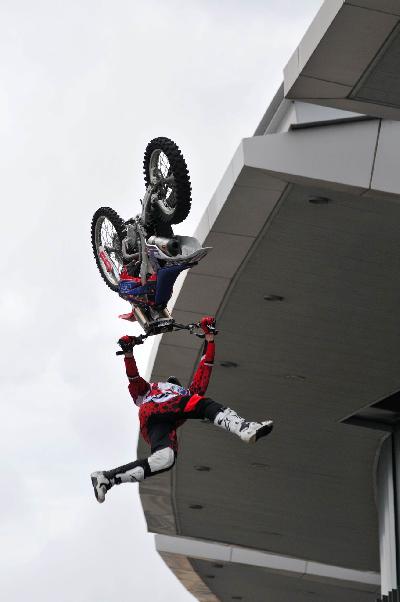 For further information, or an interview opportunity please contact: