As the long battle over six days to reach the Finals arrived, Team Italy had shown how strong their Wakeboard scene is today and succeeded in getting no less than 14 Riders through to the various Finals. Although the cool and sometimes damp Coleraine weather did not make life easy on the water, the general performances were some of the highest we have ever seen. As the Open Finals approached, at this stage, Italy had taken gold in Veterans Men /Pierluigi Mazzzia, Masters Women / Annalisa Di Corato, Junior Women /Chiara Virag and Junior Men / Lorenzo Soprani. Ireland’s Peter Stewart took the Masters Men gold and Maxine Roux FRA the U14 Boys gold. It really was looking very like an Italian wipeout ! 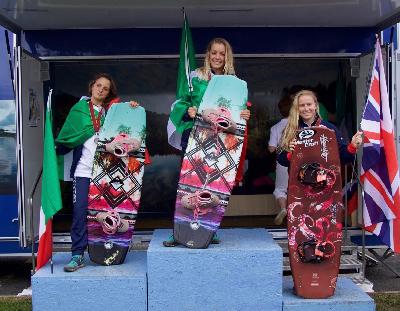 Most of the Open finalists were also IWWF World Cup stars and this showed in all the performances. While the injured Sanne Meijer NED did her best, Charlotte Bryant GBR beat her to take the Bronze medal. What followed was another Italian battle. On this occasion Giorgia Gregorio ITA just shaded the very talented Alice Virag ITA to take the gold medal and Europe Africa Champion title.


The Open Men Final was really a three-way battle between Russia, Italy and Ireland. World Cup Star Nikita Martyanov RUS had already taken the Super Final title and cash prize the previous day and was the hot favorite. World Champion Massi Piffaretti ITA struggled in the earlier rounds but was always going to be a tough one to beat. The defending Europe Africa Champion, Ireland’s David O’Caoimh, was on home turf and hoped for the perfect outcome. As it turned out, Piffaretti thrilled all with a great return to form when it really mattered and just managed to get ahead of Martyanov to take the lead with a score of 79.33. This was when O’Caoimh pulled out all the stops and put in the best performance of the entire week. His gold medal score of 79.89 shows how close the battle was. ‘A perfect ending for the home crowd on the River Bann in downtown Coleraine.

The Team results were as follows :