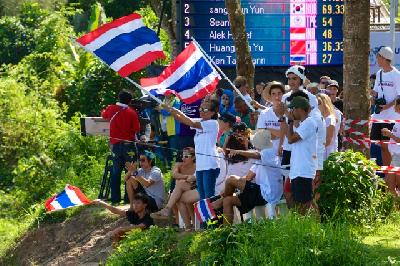 Over 2,500 athletes participate in the 2014 Asian Beach Games

Over 2,500 of Asia’s best athletes converged on Phuket, Thailand for the start of the 4th Asian Beach Games. Running from November 14th to the 23rd, the event involves some 45 countries participating in a total of 26 sports.

‘Big congratulations to China and Korea in taking the first Asian Beach Games Gold Medals. Here are the details.

The 13 men were split into two heats in the men’s cable wakeboard competition with Thomas Rossini Mackinthai (THA) throwing down the score to beat in Heat 1 of 85.67 in his first pass, and ultimately proceeding along with Angelo Linao (PHI) and Paul Cantos (PHI) straight to the finals. In Heat 2 the competition was much closer with Ken Tackmann (THA), Yun Sanghyun and Im Sanboth of Korea improving on their scores on their second rounds to progress to the finals. The remaining seven obtaining a second chance in the Last Chance Qualifiers (LCQ).

The women’s cable wakeskate competition saw seven competing for six slots in the finals with Susan Larsson (PHI) just topping out Tulip Tadtiam (THA) with their second passes with Tantanasom Chiaybood nibbling at their heals, while bronze medalist at the 2nd Asian Beach Games Muscat, Oman 2010, in Shannon Teng from Chinese Taipei was delighted to qualify directly to the finals in 4th place.

In the women’s cable wakeboard finals an impressive score of 78 in her first round saw the very talented and World Cup star Duan Zhenkun (CHN) set the benchmark whilst Yun Heeyun (KOR) improved on her second round score to relegate Srirasin Khamklom into 2nd place. Unable to be beaten Duan Zhenkun’s final run turned into a victory lap, to much applause by her Chinese team mates. Gold for China will give great encouragement to her team for the future.

There were a number of surprises in the men’s final with riders falling early or dropping handles. After an early fall in his first round Yun Sanghyun (KOR) relegated Ken Tackman (THA) into 4th place.

Meanwhile World Cup star Im San with an impressive technical first pass performance spoilt the party for the Thai team snatching victory over Mackinthai. With the gold medal already his, he left it to the very end of his final pass to attempt a trick finishing with a KGB 5 in front of the stands.

In women’s cable wakeskate Susan Larsson’s (PHI) score of 80.67 put her into first place after the first round, with two Thai riders snapping at her heels. Tulip Tadtiam proved unable to improve on her first round score, and had to settle for bronze. Penultimate rider off the dock Tantanasorn Chaiyabood raised the bar again to 85, which, with her last run, Larsson was unable to beat, giving the Thai team another reason to celebrate.

In the men’s cable wakeskate finals Burid Detwilaisri (THA) was leading the field after the first round.

Jose Cembrano (PHI) improved considerably on his first round score to capture bronze, while in the closest of scores Techin Nakajima (THA) improved on Cembrano’s score with an 86.67 to win by the narrowest of margins over Cembrano’s final round score of 86.

The awards’ ceremony proceeded for the wakeboard medals before the heavens opened resulting in the postponement of the wakeskate awards until the Tuesday 18th November in conjunction with the team awards.